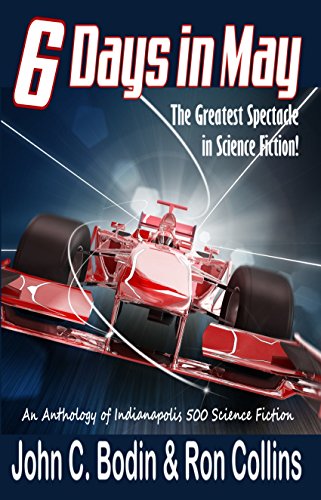 I find it hard to express how much pure enjoyment and fun I got out of this slim volume.
- Tangent Online

Strap yourself into the cockpit and follow along as John C. Bodin and Ron Collins take you on six hot laps around the Indy 500's past and future.


"Neighbors on Gasoline Alley" - A race team from Betelgueuse enters
the Indy 500 as a gesture of peace, and runs into a mysterious problem.
What's a fellow race crew to do but lend a helping hand?

"Speeding" - A famous chronumentary director and his best friend will
go to any length necessary as they return to 1964 to capture the dramatic
secrets of one of the most horrific accidents in Indy history.

"Oh-oh!" - It's 1969 and shape-shifting aliens from Tau Ceti are out to
rig the most wagered upon event in the known universe. It's up to a vice
cop from outta this world to avoid the fickle fate of bad fortune himself.

"Ghost of a Chance" - A racer from the far future returns to the speedway
in hopes of finding the roots of her humanity behind the wheel of a turbine
racer, circa Standard History Year 1967.

"Do Android Drivers Dream of Electric Flags" - A past champion down
on his luck discovers the first self-sentient AI who loves to drive.
Who's in charge here? As long as they go fast, will it matter?

"The Day the Track Stood Still" - Drivers have always had special relationships
with their cars, but Buddy's is more special than most. He'll see just how
much when the B'rada come to town with plans to take home something beyond the
Borg-Warner trophy.